A couple of weeks ago we took a visit to the WWT Llanelli Wetland Centre in south Wales. Unfortunately the weather, which had promised to be warm and sunny, was replaced with gloomy overcast skies and drizzle. The conditions made photography challenging at times but I was determined not to let this dampened my spirits. and still came away with hundreds of images. As a result I have broken down my blog posts from the trip into several parts.

This first post is focusing on the ducks found at the reserve, but first a brief introduction:

During our visit we barely scratched the surface of what the reserve has to offer, instead concentrating our time around the various wildfowl pools. These are home to many native and familiar species of ducks and geese, along with the more exotic migrants and collections of non-native birds which are vulnerable or threatened in the wild.

Below, a brief video of one of the pools. A bird lover’s paradise!

Crowded! A black necked swan among mallards and mandarin ducks at the reserve’s ‘top pond’, overlooked by the cafe and visitor centre.

These birds are provided with a sanctuary and many are used in conservation breeding programs, with the aim of boosting their populations. The centre is also a refuge for the ‘nene’ or Hawaiian goose, the rarest goose in the world!

The wildfowl here at WWT Llanelli are very tame, well used to a daily flow of human visitors and you can wander right up to them as they go about their behaviour, relatively undisturbed. This offers unrivalled views and a highly rewarding experience.

The common eider ducks were one of my favourite birds to photograph with their gentle expressions and bizarre wedge shaped heads.

The eiders were remarkably placid, and virtually nothing would disturb their afternoon snooze. An occasional curious glance through an open eye and then they would return to their slumber unconcerned. 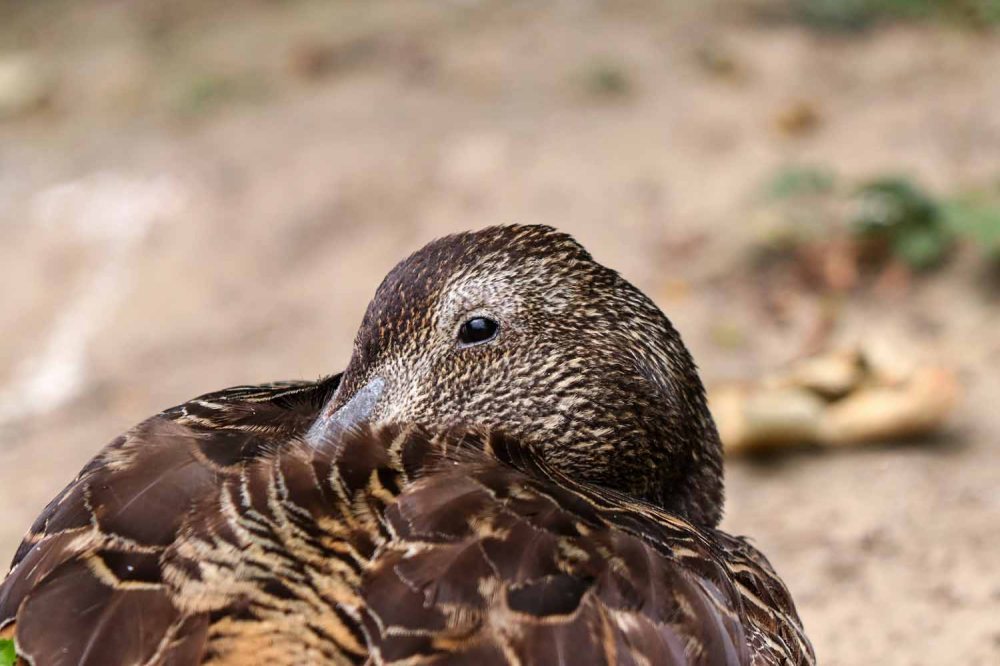 As with many of the drakes here, the male eiders were not their usual striking white and black colouration. Instead they had already moulted in their dark eclipse (non-breeding) plumage, leaving them looking a little unkempt. 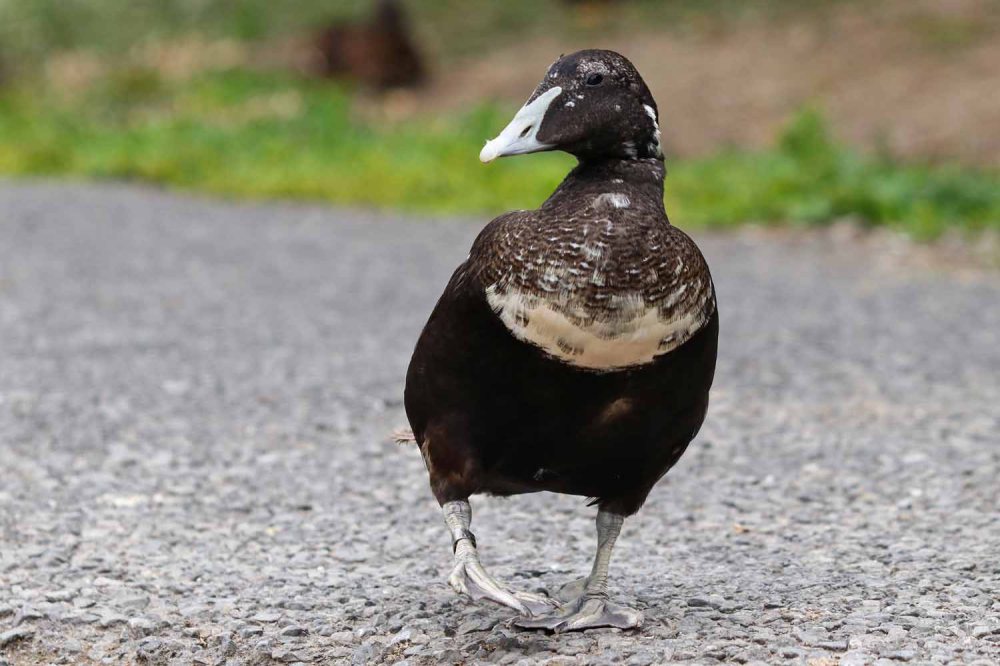 Male eiders resting among the daisies

Another duck that had also lost much of his magnificent to eclipse plumage was the male mandarin duck. In start contrast to his over the top, vibrant orange breeding feathers he was now a dull reddish brown.

Now very similar in appearance to the steely grey female, only his orange legs and beak reveal his true identity. 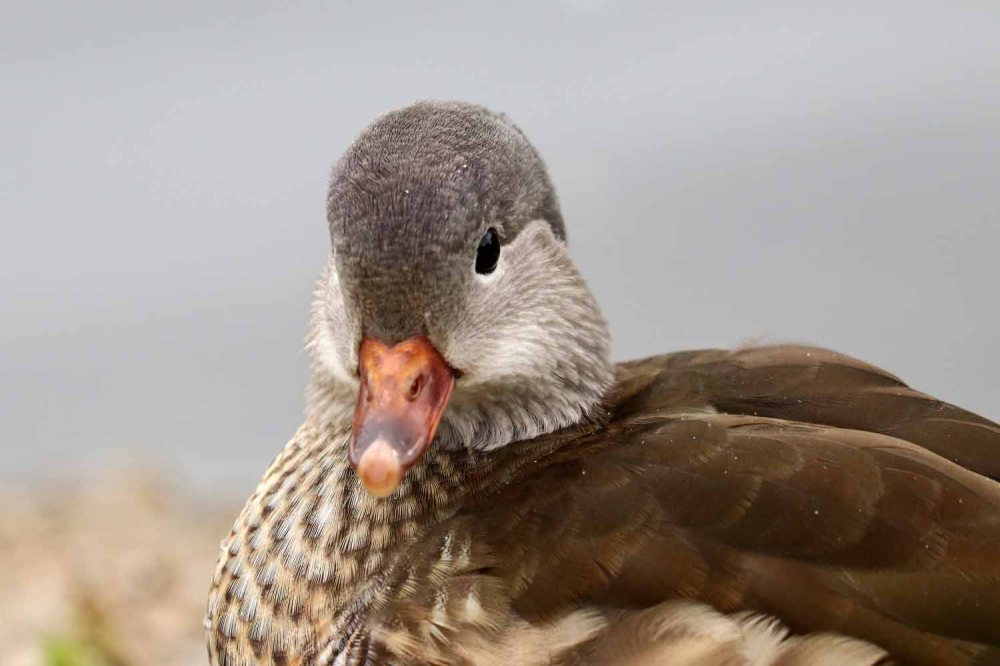 The female mandarin duck also has a distinct white patch around her eye but is otherwise quite unremarkable. Her dull appearance is essential for camouflage whilst she incubates her eggs and rears young. 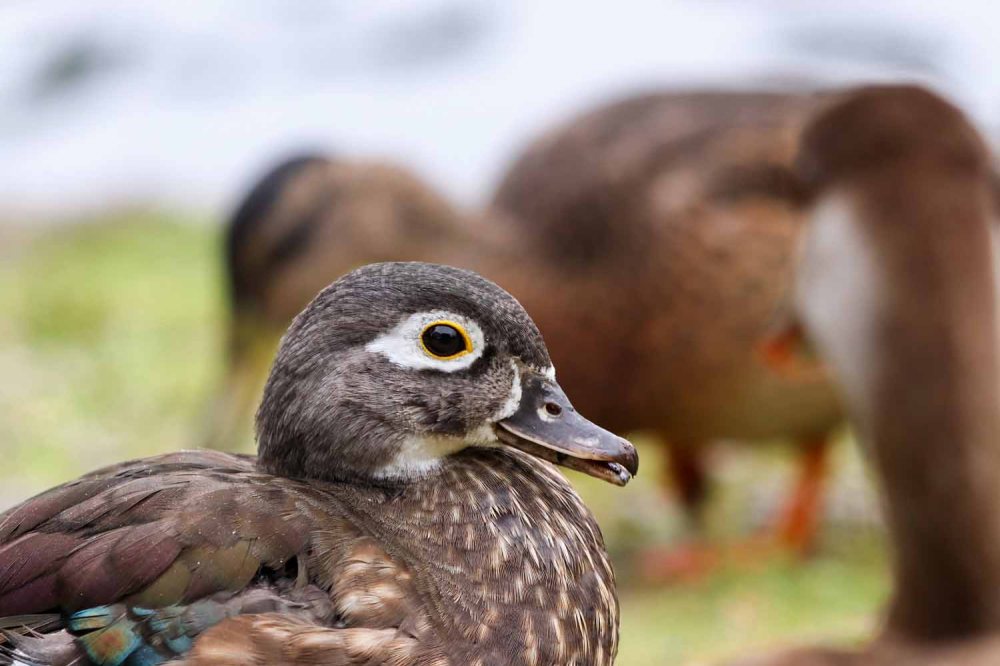 Another highlight of the day was an encounter with goldeneyes. These are winter migrants to the UK however here at WWT Llanelli there is a resident flock all year round.

With their bright eyes and large head crests, goldeneyes appear to have a permanently surprised expression and are rather comical little ducks.

The bright yellow eyes which give the goldeneye it’s name 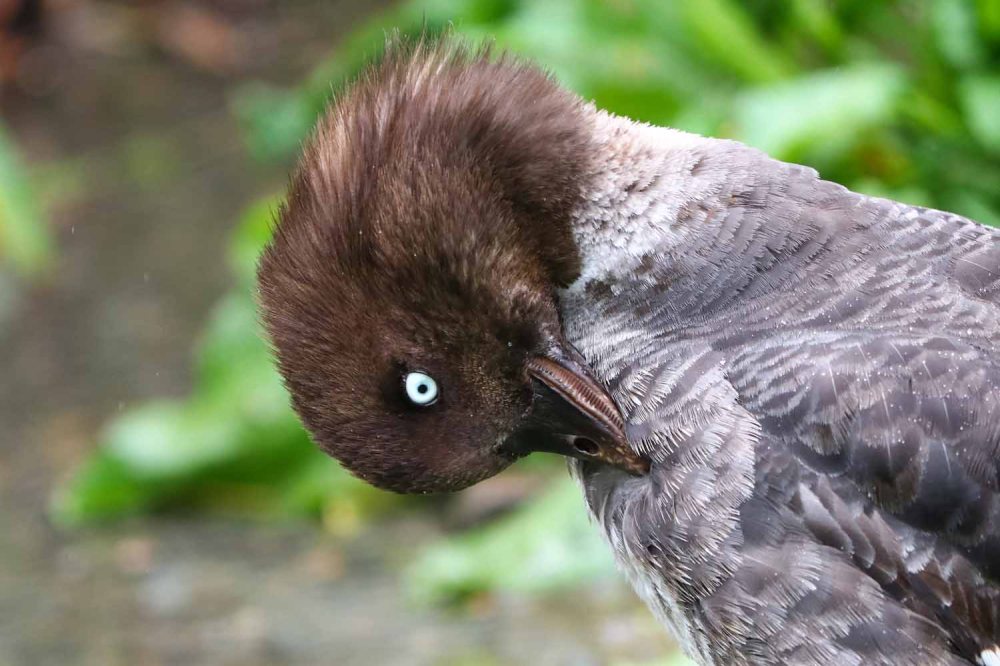 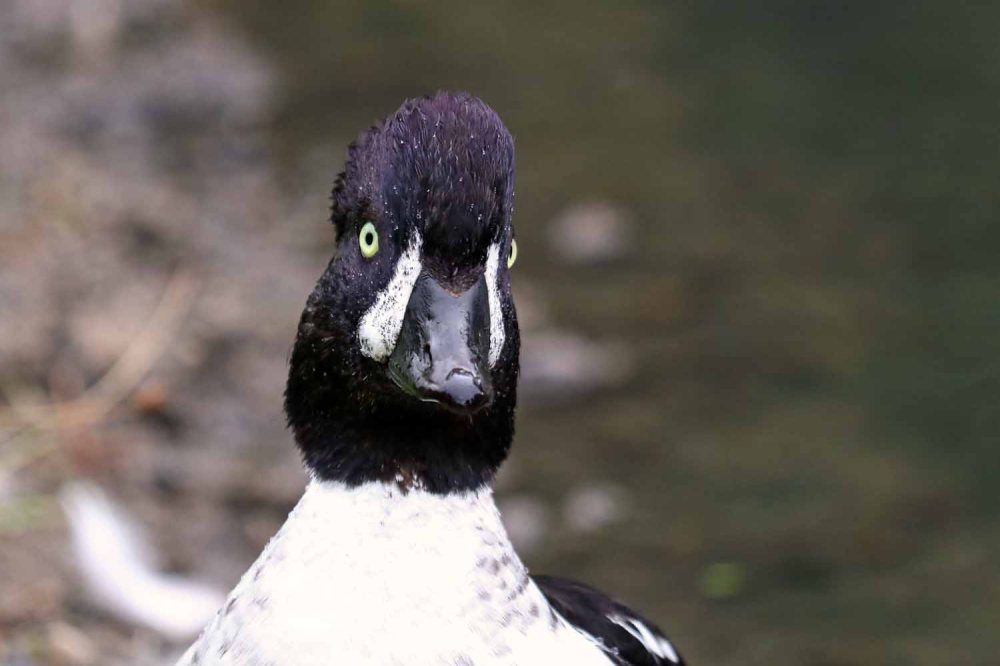 Again here, some of the males are just in the process of moulting their breeding feathers, although the transformation is not as extreme as in some other species such as the mandarin above. 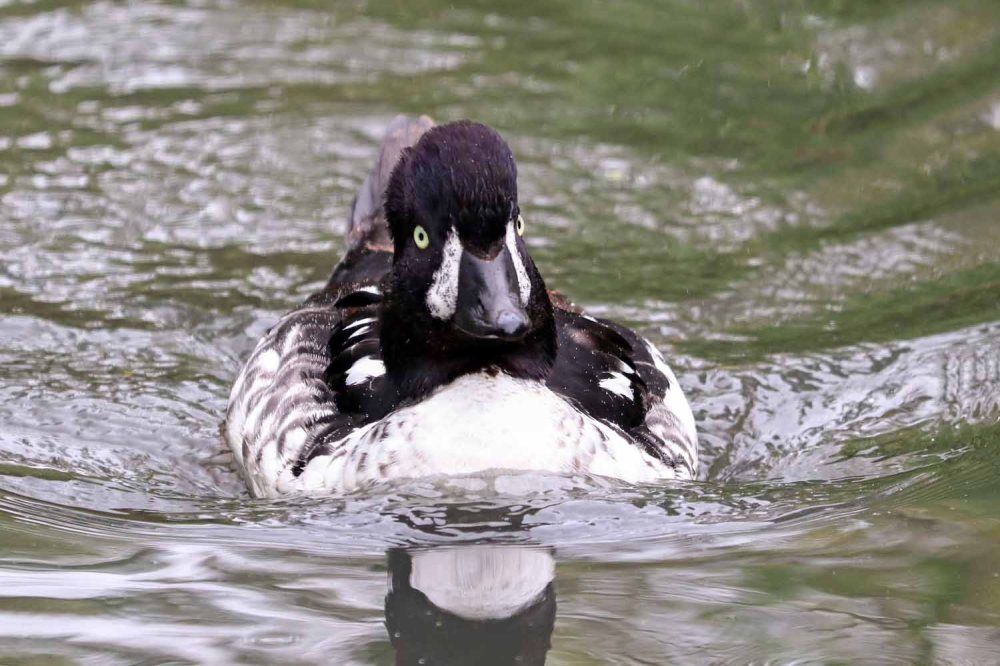 Leaving the goldeneyes behind we arrived at the european pond, home to a small of flock of female tufted ducks. As the females swam beneath a canopy of green their reflections shimmered in the water below creating some lovely scenes.

Tufted ducks and their reflections

Whilst there was no sign of a male tufted duck today, they are clearly around the reserve and breeding successfully, as demonstrated by the presence of this adorable fluffy duckling. 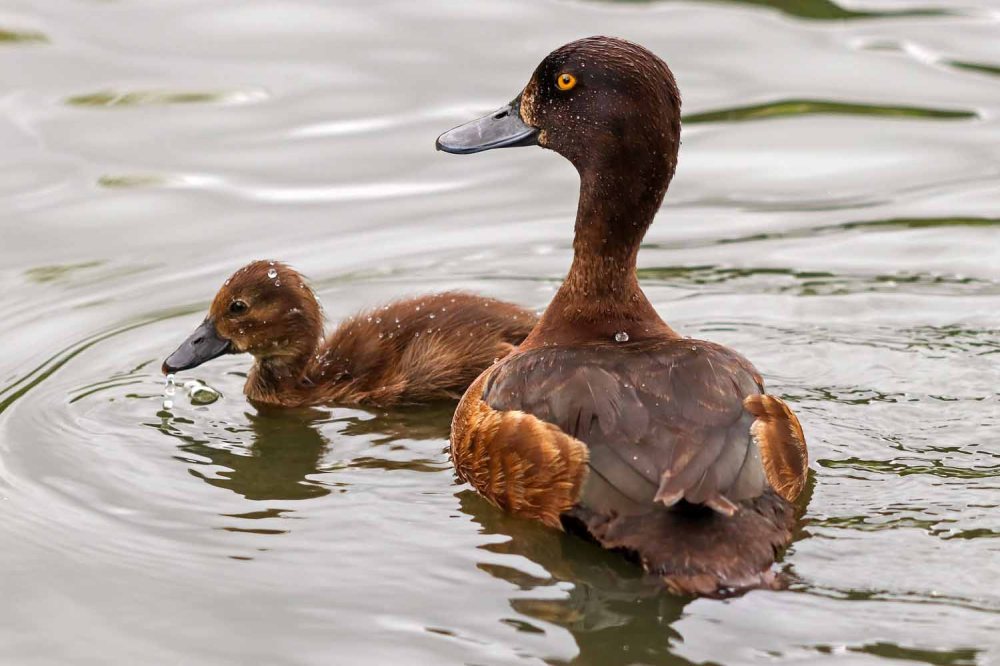 Watched over by it’s mother this duckling bravely left the water, clambering onto the bank in search of food just a short distance away from where I watched on. 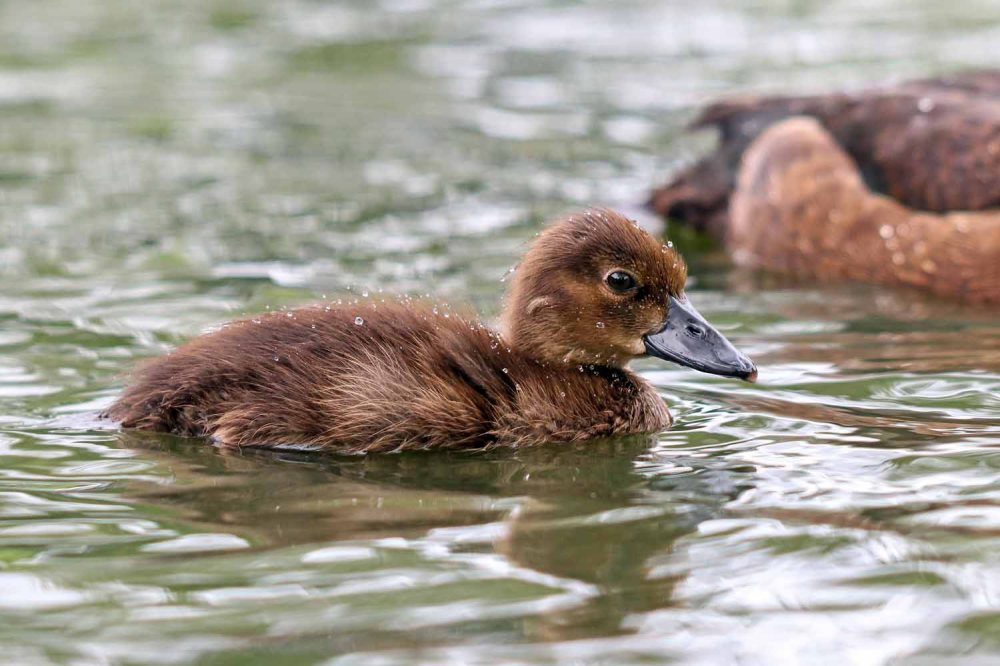 I was able to capture some lovely close ups of this little one, even though it meant crawling over sharp gravel and duck poo to get them! 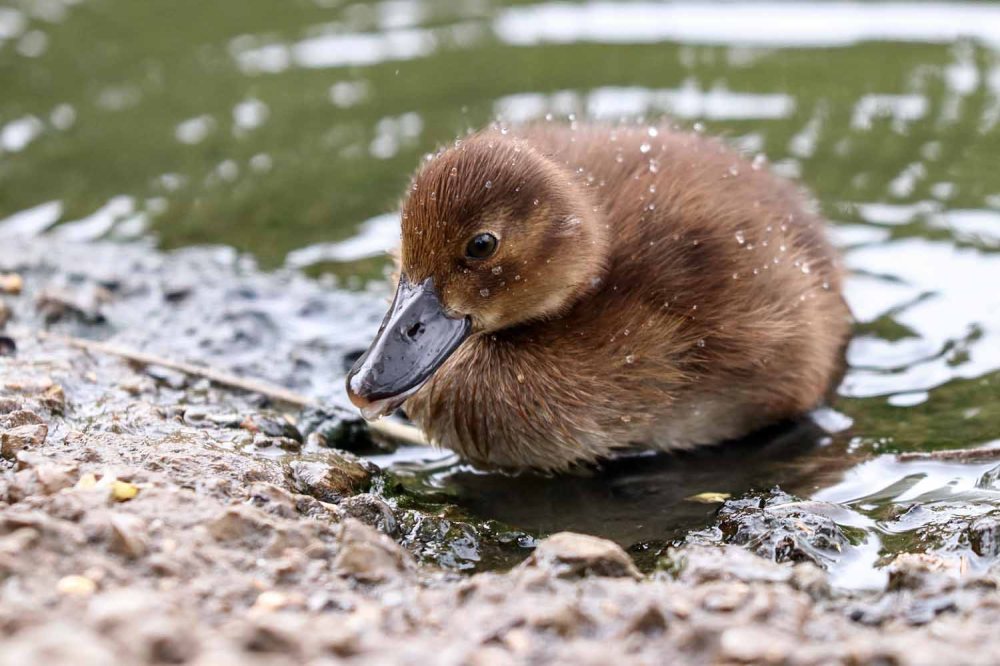 The centre wasn’t short of other ducklings either, including mallard ducklings of varying ages and sizes.

Mother mallard with a trio of hungry youngsters

A pair of shelducks also had their work cut out, caring for a brood of well juveniles. Their faded feathers hinting at the beautiful plumage they will soon grown in to. 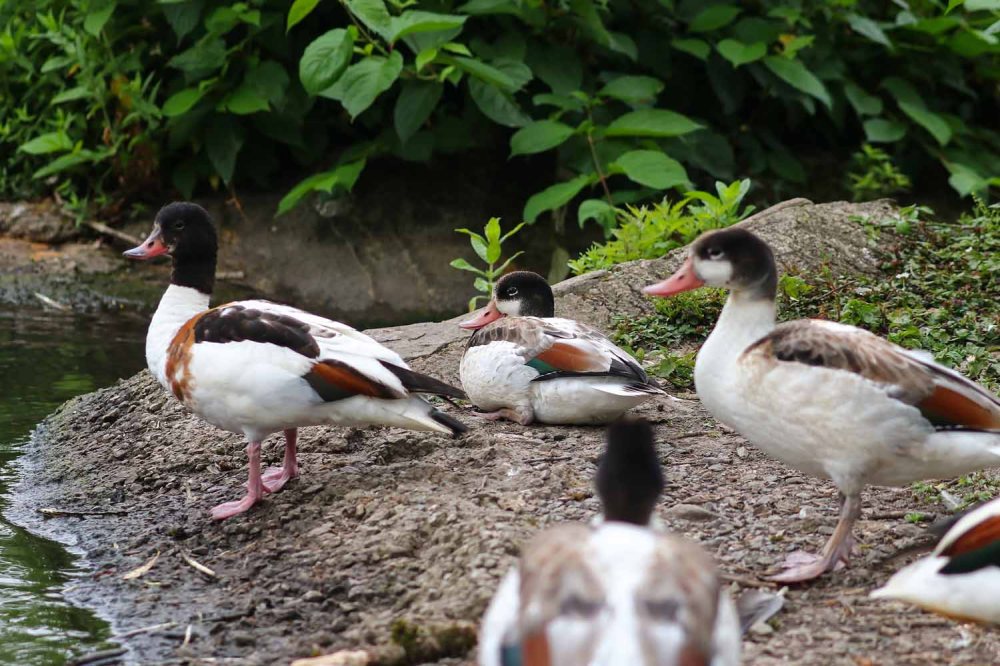 The father grazing with a juvenile in the background

Leaving the adorable babies behind we ventured further afield and into the various pens holding the non-native species. The Asian, South American and Australian zones were home to many more unusual and exotic looking ducks. Thank goodness for the handy information boards dotted around the reserve to enable to figure out what species you are looking at.

This beautiful duck is the marbled teal, named for it’s marbled brown and white feathers present in both the drake and the duck. The marbled teal is considered a vulnerable species and has a scattered range around southern Europe and north Africa.

Marbled teal in the drizzle 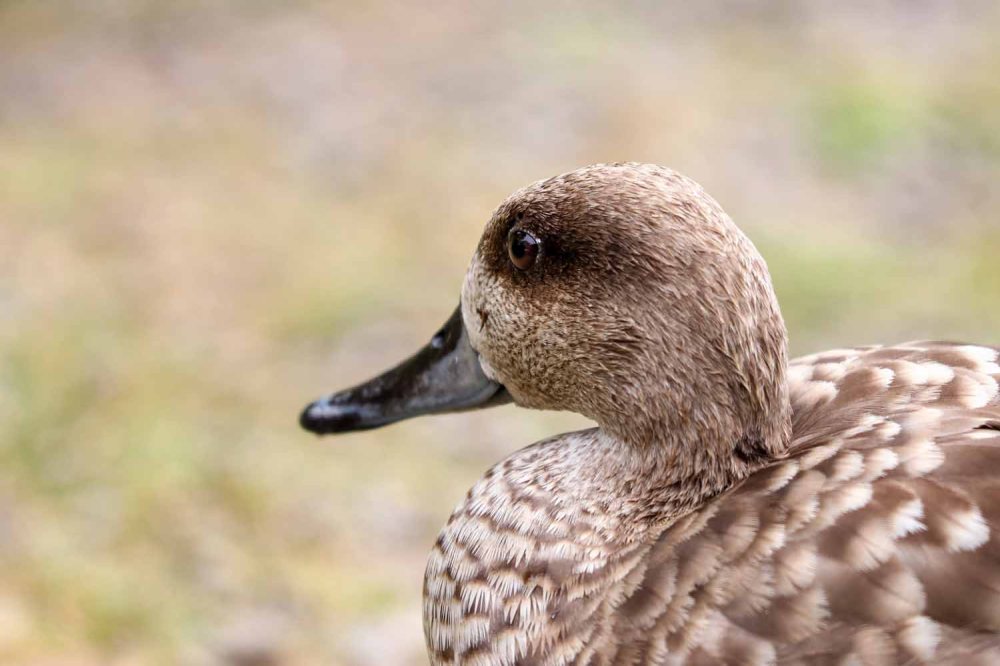 This cinnamon teal originates from the western areas of North and South America. The drake as shown below, has lovely chestnut brown plumage with a piercing red eye and blue and green speculum patch on the wing. 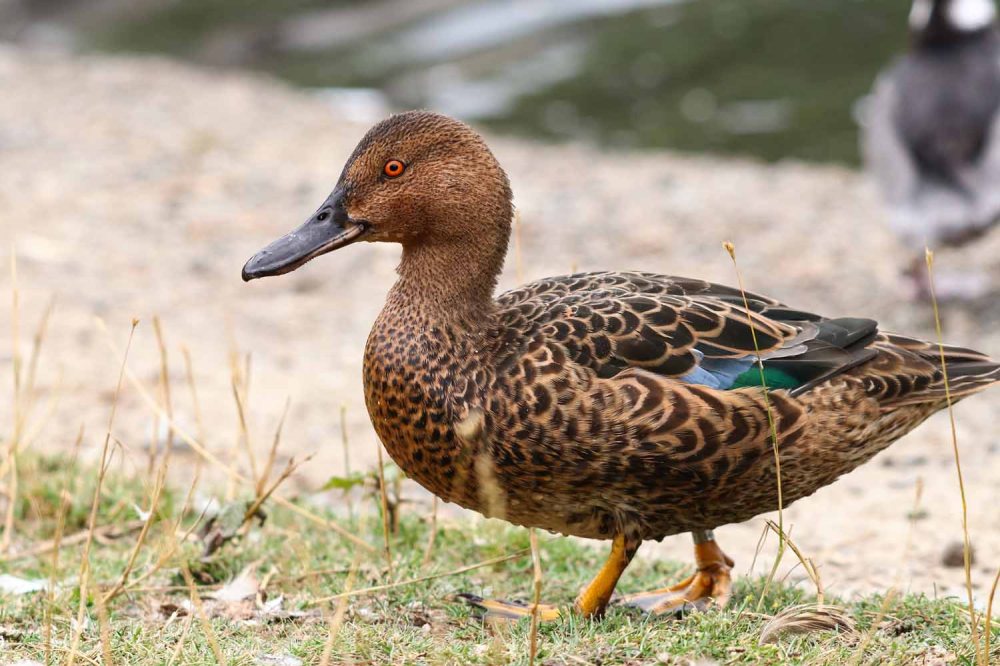 From America to the Philippines and below is the endemic Philippine duck, another species vulnerable to habitat loss and hunting in the wild. It is a very shy, elusive species and this was the only glimpse I saw of one during our visit.

With many of the non-native species at WWT Llanelli also in their eclipse plumage this further complicated their identification and some of them were a real challenge to pin down. With a little help from the iNaturalist app and various groups on facebook I think I’ve finally got them all figured out!

It is certainly worth another visit to the centre in the Spring to capture the male ducks in their full finery!

The Eurasian wigeon is widespread throughout Russia and northern Europe but is also a winter visitor to the UK, with a few small wild flocks in residence all year round.

The male is a beautiful chestnut red colour and wears a yellow head stripe and grey body feathers during the spring. Here this drake is nearer the end of his moult into eclipse plumage, with just a few grey feathers remaining on his wings.

His female is a much duller brown colour but both sexes have a distinct white belly. 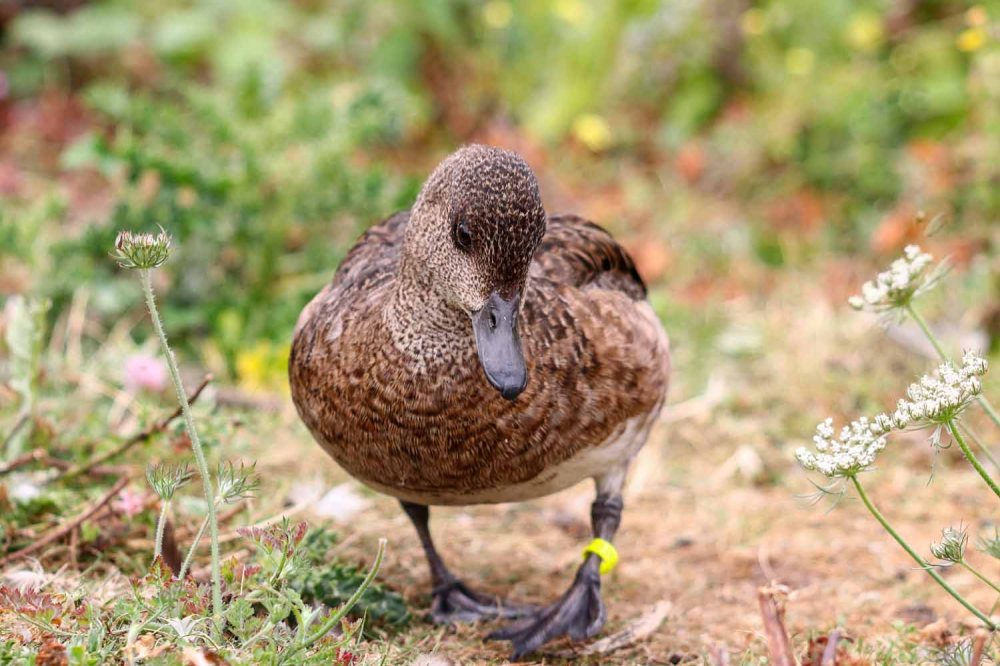 These males had already shed their spectacular breeding plumage, leaving them now rather plain and drab little ducks but still retaining a bright red bill. 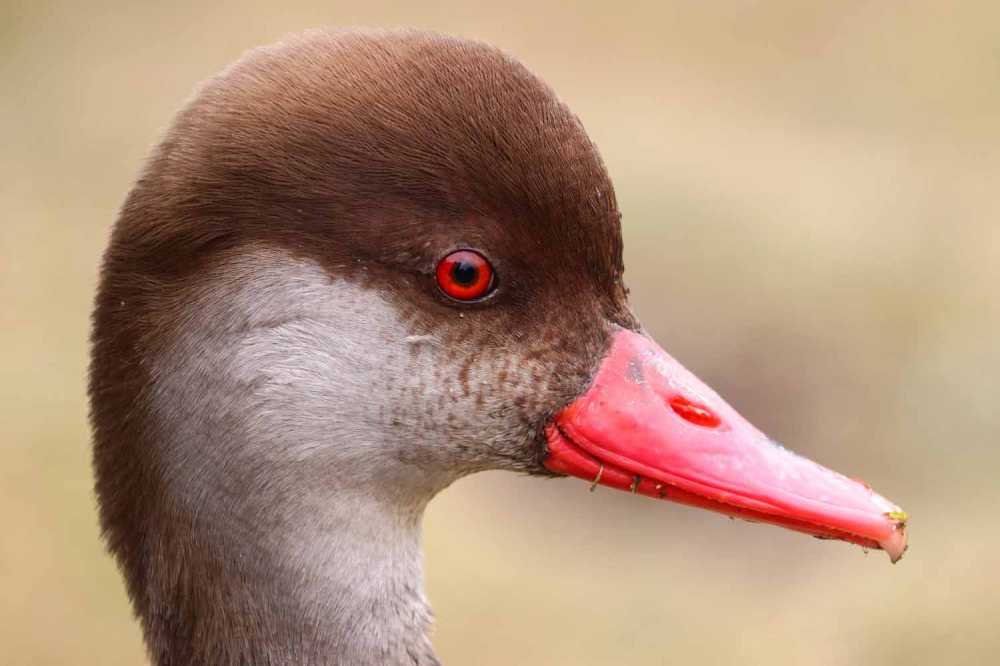 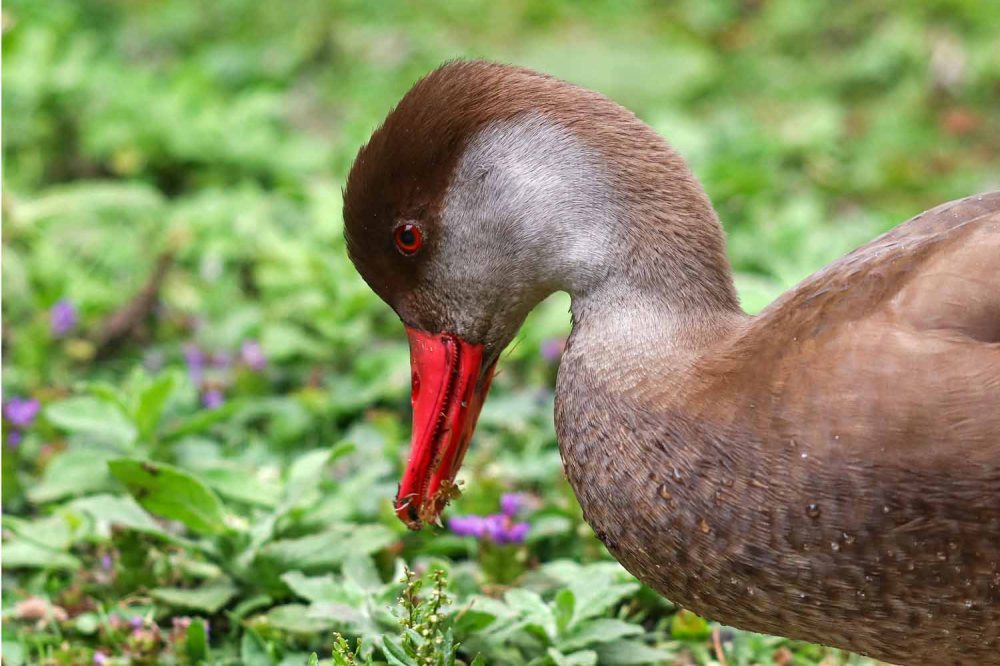 Drake with ducks in the background

The pochards were very approachable, this female happy to lie on the ground inches away from my as I photographed her and her companion, a female falcated duck.

The falcated ducks, native to Eastern Asia and Siberian were also in moult, but this drake still shows the remnants of his emerald green head and distinct wavy grey patterning on the body.

These drakes would also have ornate sickle shaped feathers on the edge of the wing at the height of the breeding season, but these had already been shed leaving the wing stunted and temporarily flightless.

The female of the species is a fairly unremarkable bird, dark grey-brown in appearance with a grey beak but nevertheless photogenic.

Coming in for a closer look… 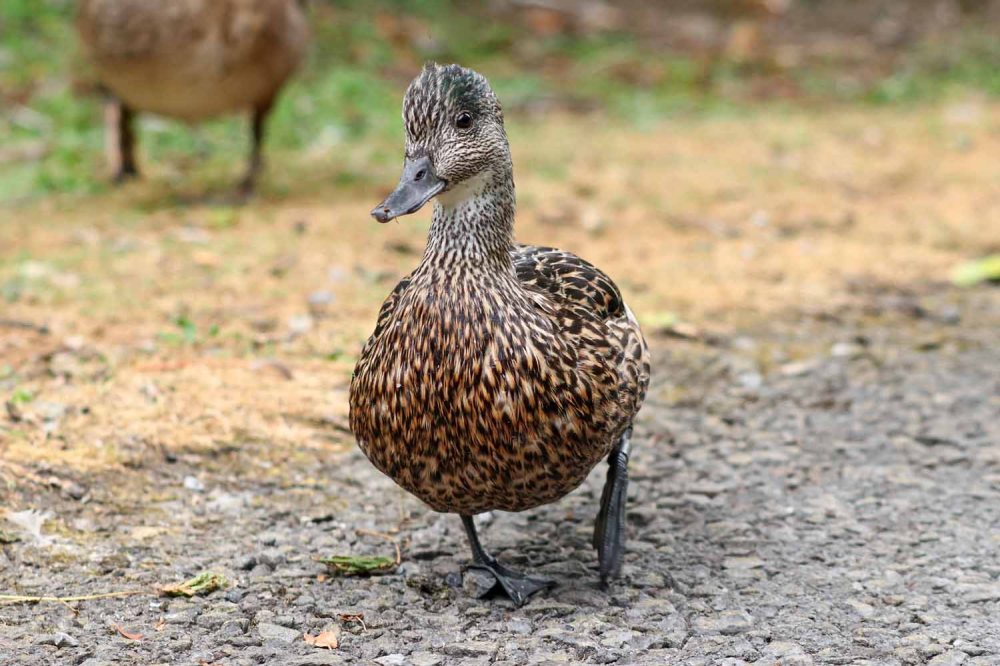 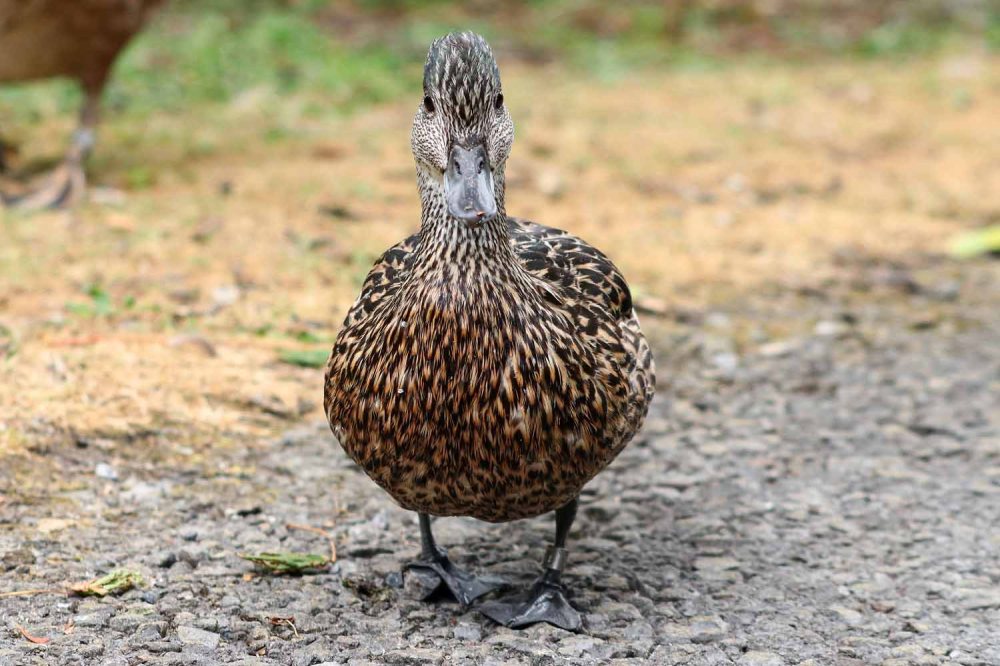 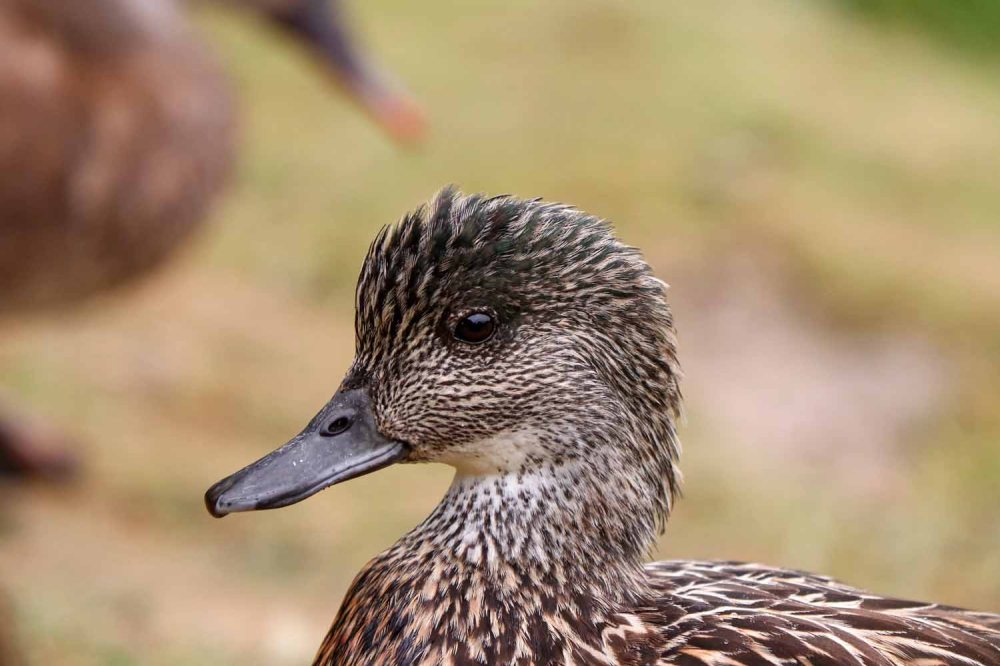 With so many species of duck in one place, it really was fascinating to see how the difference species had all evolved their own unique features, bill shapes, colouration and patterns.

The male Australian wood duck below had a mottled breast transitioning abruptly into the most perfect silver grey feathers that appeared as smooth as silk.

Some of the ducks were so strange looking and brightly coloured, they almost resemble cartoons or perhaps drawings from a child’s imagination.

This pair of beautiful chiloe wigeons are not subtle in their appearance, but sadly the overcast conditions did not quite show off their full vibrancy.

Both males and females have iridescent patches on their heads 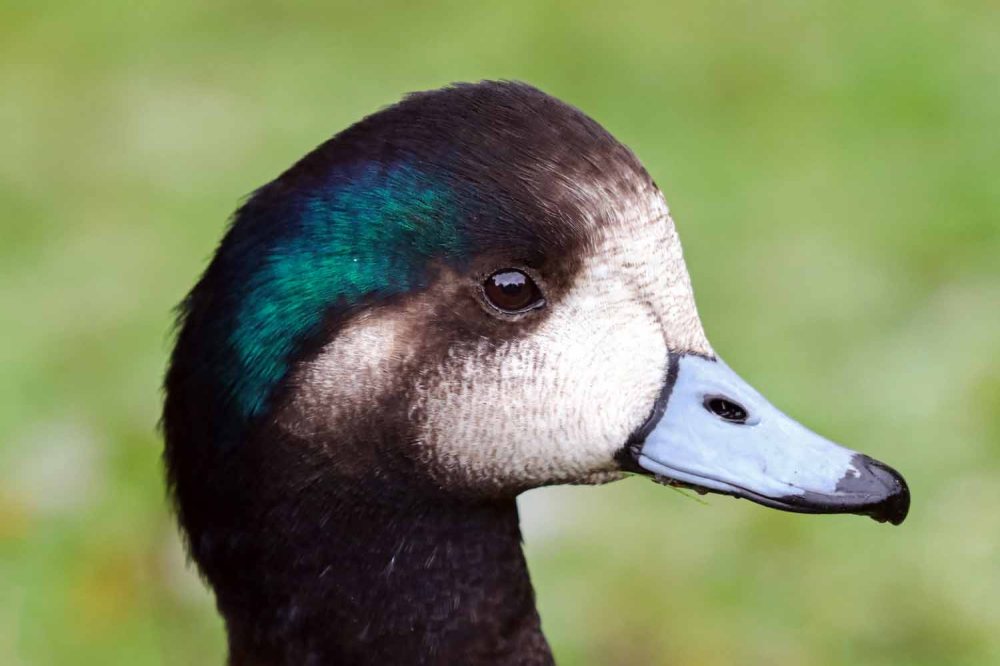 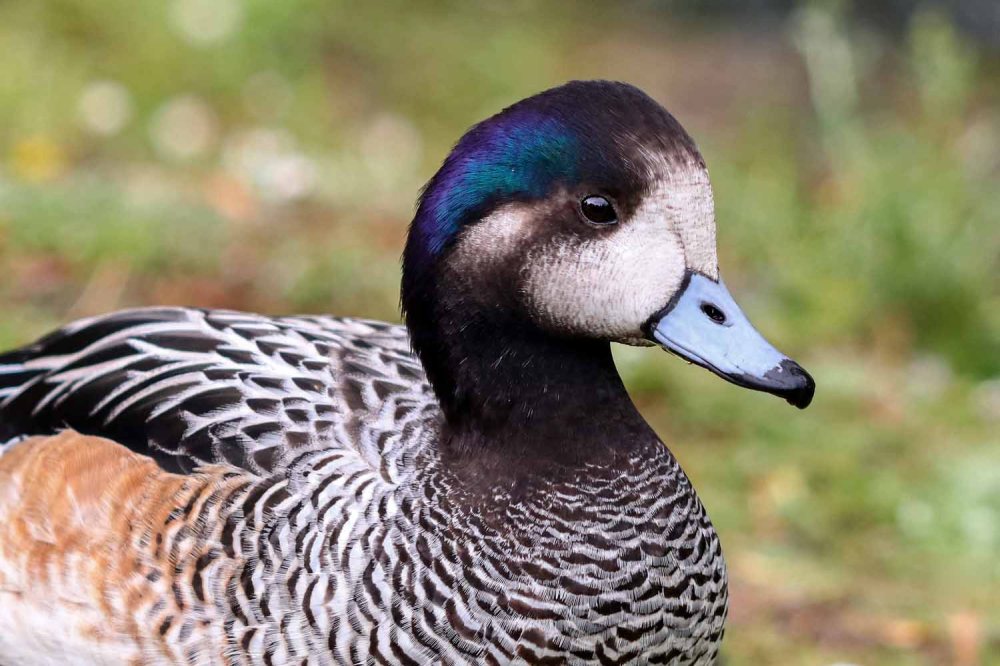 Vividly coloured beaks seemed to be a common feature too. It is thought that the brightness of the beak indicates a bird’s health and fitness and therefore their suitability as a potential mate. It could also be used as a signal in courtship and territorial behaviour.

This male and female pair of puna teals, native to the Andes, have striking black and white faces with a contrasting power blue beak.

A pair of puna teals 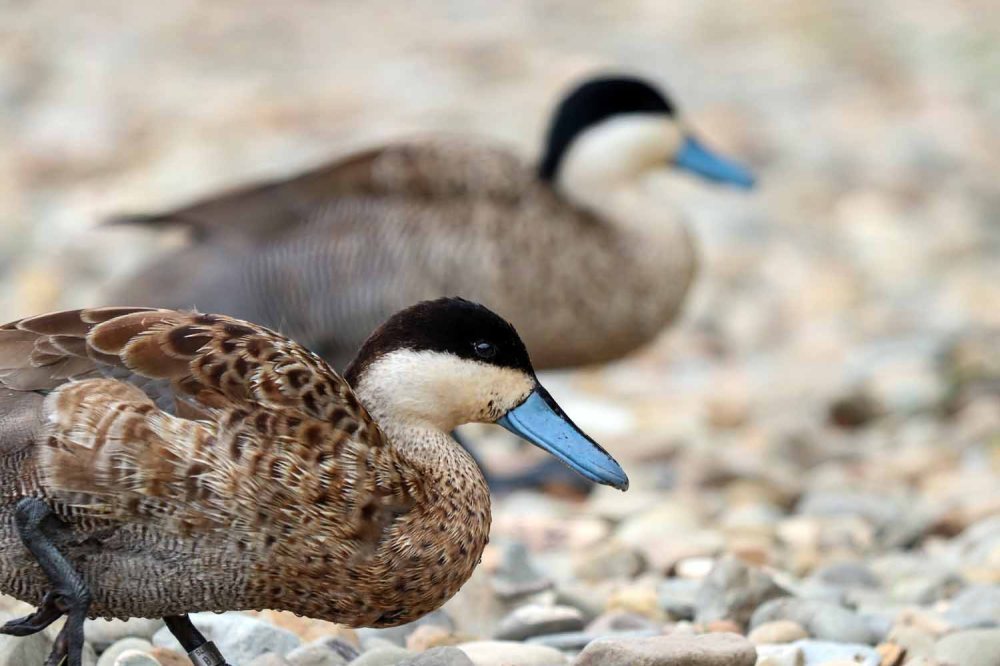 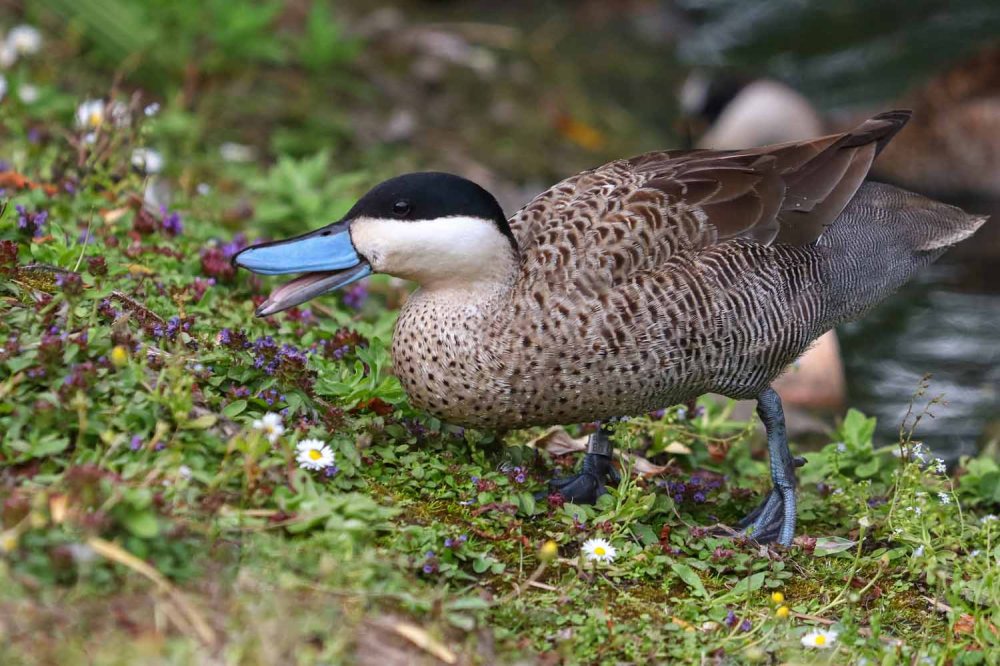 The red-billed teal is similar in appearance to the puna teal above, but has a very different home range, found in South Africa.

Another blue billed duck, this time an Argentinian ruddy duck.

Not to be confused with this, a white-headed duck, a European species whose populations have seen a dramatic decline in the last century.

Another unmistakable beak belonged to this bird, a sharp-winged teal (also known as the yellow-billed teal). It is native to the Andes and South America. A bold black stripe runs down the top of the beak as though it has been daubed on with a paint brush.

Whilst this final species, the red shoveler, may not have had a brightly coloured beaks, they were equally as bizarre and striking. Shovelers have unique spatula shaped beaks with comb like structures at the edge which the use to sieve food from surface water.

The spatula shaped beak of the red shoveler 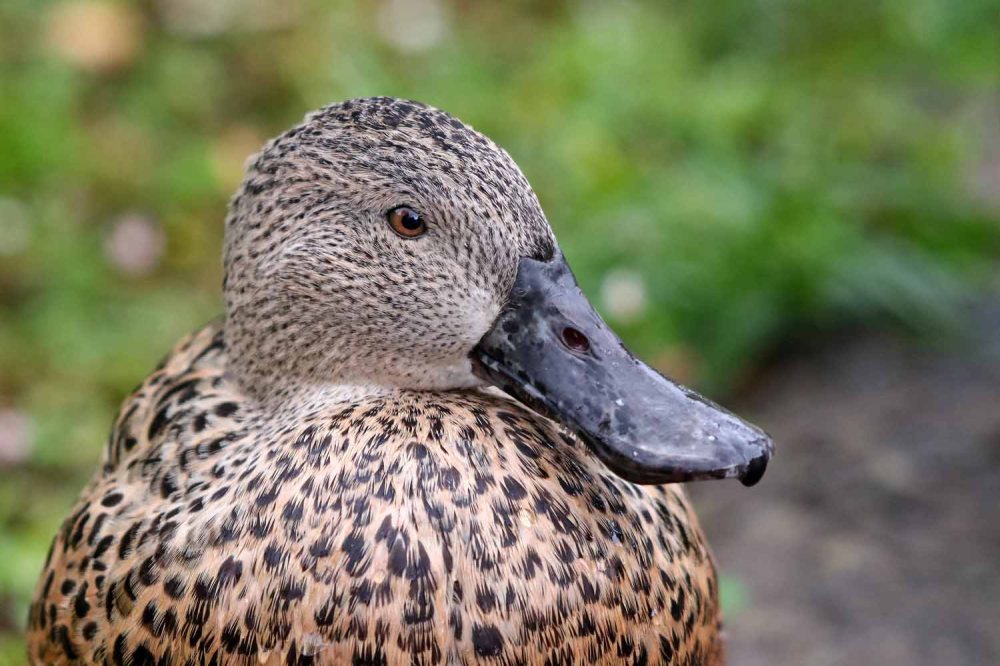 The male of the species has a redder colouration and pale eye. The female is drabber in colour with a darker eye.

Red shoveler drake (front) with a female (behind)

Keep an eye out for my next blog posts where we will be looking at the various species of goose found at Llanelli wetland centre, including the rarest goose in the world!