It’s been a long time since I photographed the starlings here in Aberystwyth but today I finally dusted off the old 17-55mm kit lens, wrapped up in a hat and gloves and headed out to capture the action.

Starlings are found in Aberystwyth all year round, but each winter the numbers increase dramatically as our resident birds are joined by migrants from across Europe. Whilst the birds spend most of the time widely dispersed feeding throughout the countryside, as dusk approaches they gather together in huge flocks before roosting together for safety.

The old Victorian pier in Aberystwyth is the chosen roost for our starlings and each evening they gather like clockwork, arriving shortly before sunset in response to the fading light.

This evening the skies were relatively clear with just a few moody looking grey clouds gathering over a darkening sky. Whilst it wasn’t quite the striking sunset I was hoping for, as the sun dropped below the cloud the pier was backlit pleasantly by the last of it’s golden rays.

After several impatient minutes the first scattered starlings began to appear in the empty sky, as if from nowhere. Soon more and more birds soared into view and these small travelling groups began to merge into a bigger and bigger cloud of black silhouettes.

Beginning to fill the skies 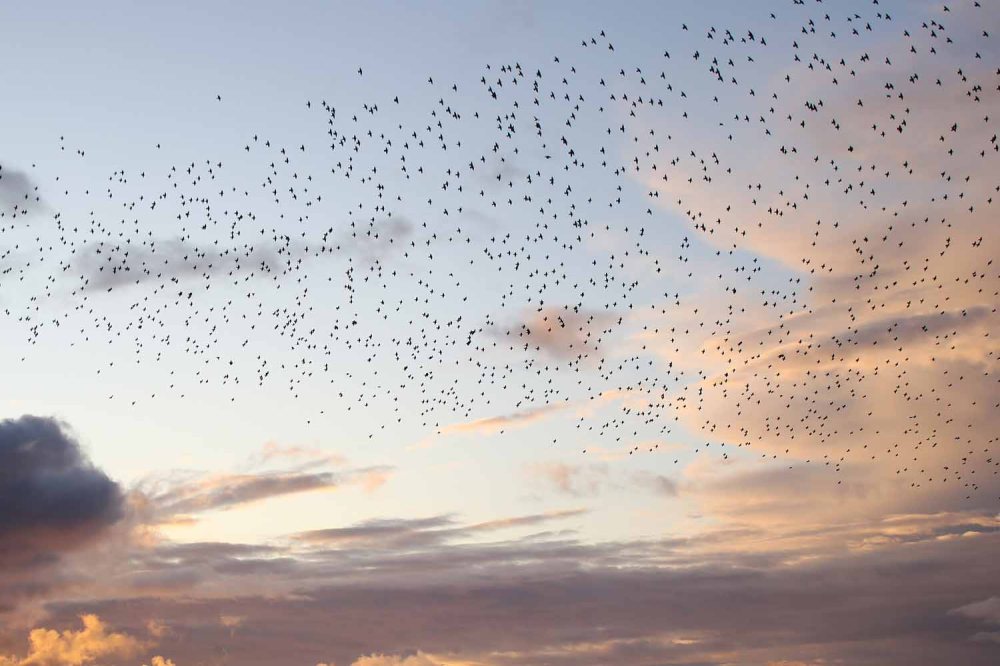 Swirling high above the pier 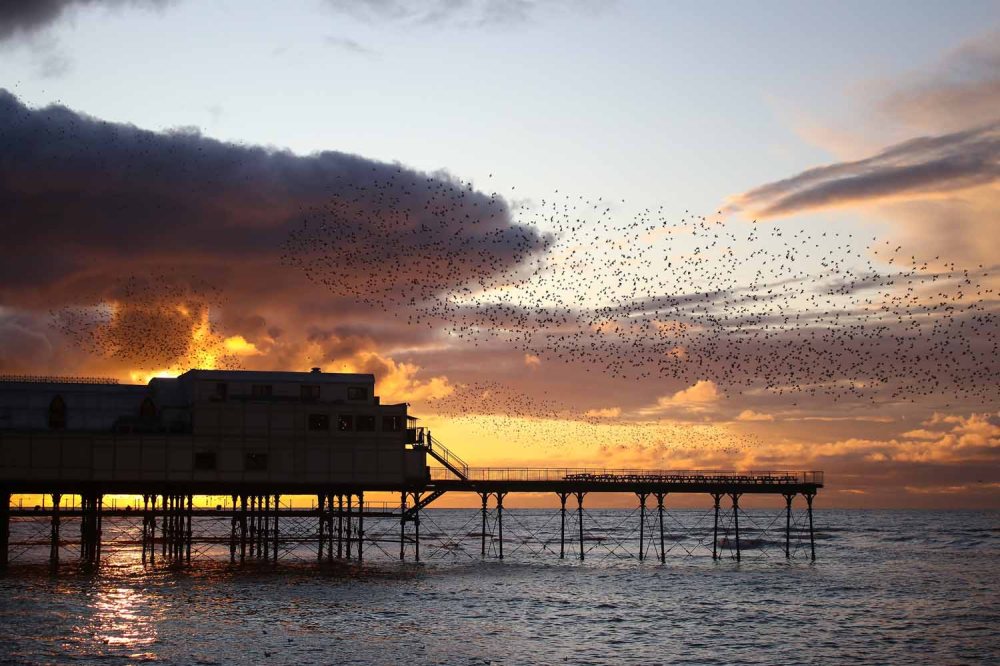 The starlings then began to soar and sweep through the skies in a synchronised movement, each bird reacting to the behaviour of it’s six nearest flying companions to ensure the don’t collide!

These flocks or murmurations can create some wonderful patterns during these flying displays although today they were more scattered, only occasionally forming the tight formations I was aiming to capture and not in any vast numbers.

Winding around the pier walkway 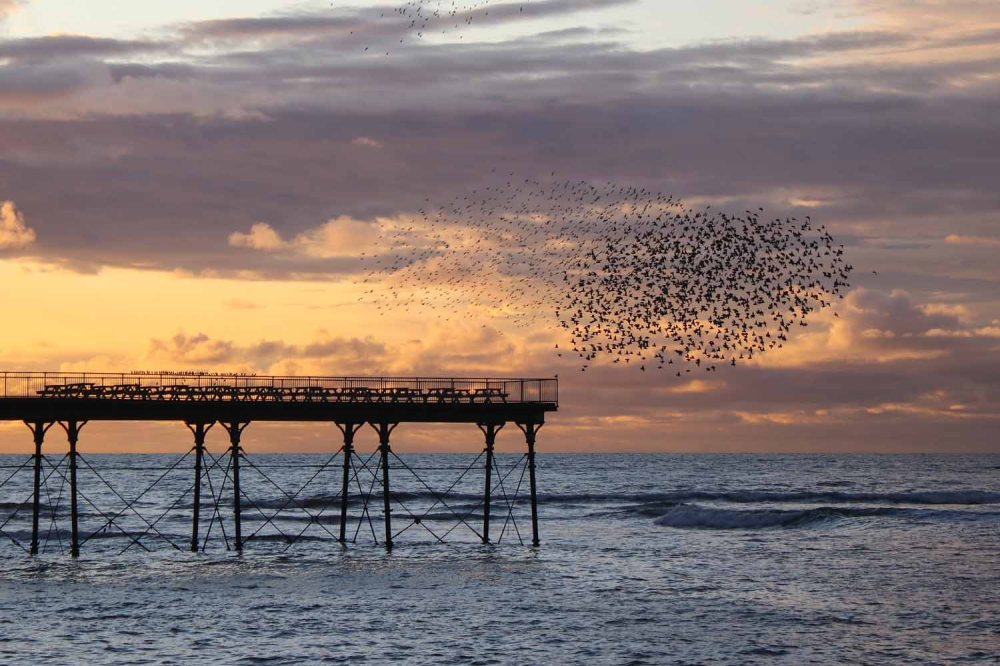 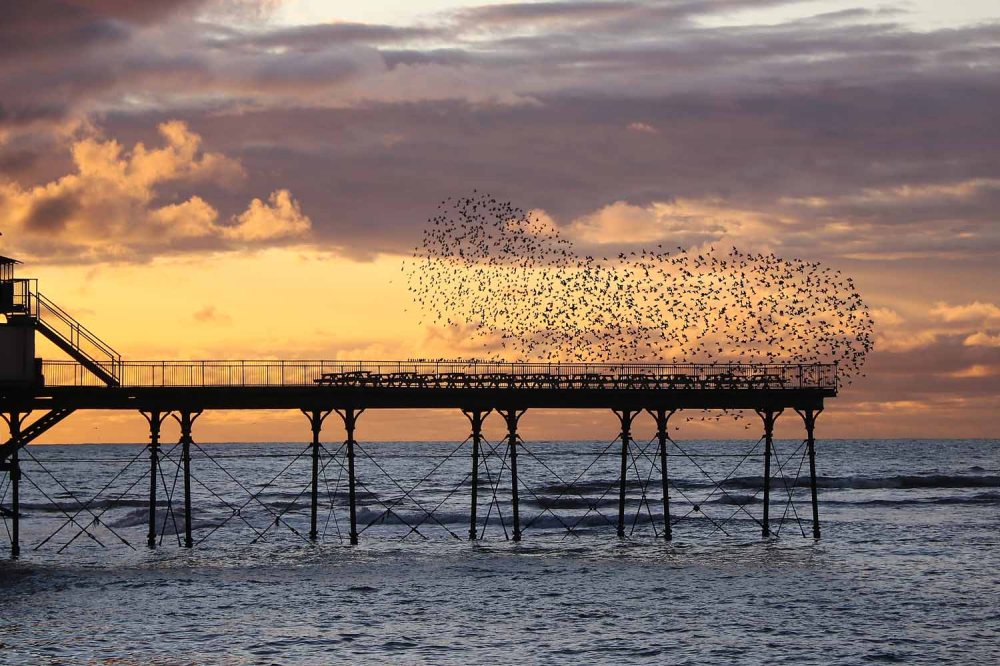 With the sun about to disappear below the horizon a few brave birds broke away from the safety of the flock and took the plunge, descending into the struts of the pier. This set off a chain reaction in the rest of the flock and suddenly a curtain of birds dropped down to join their companions.

Descending down into the roost 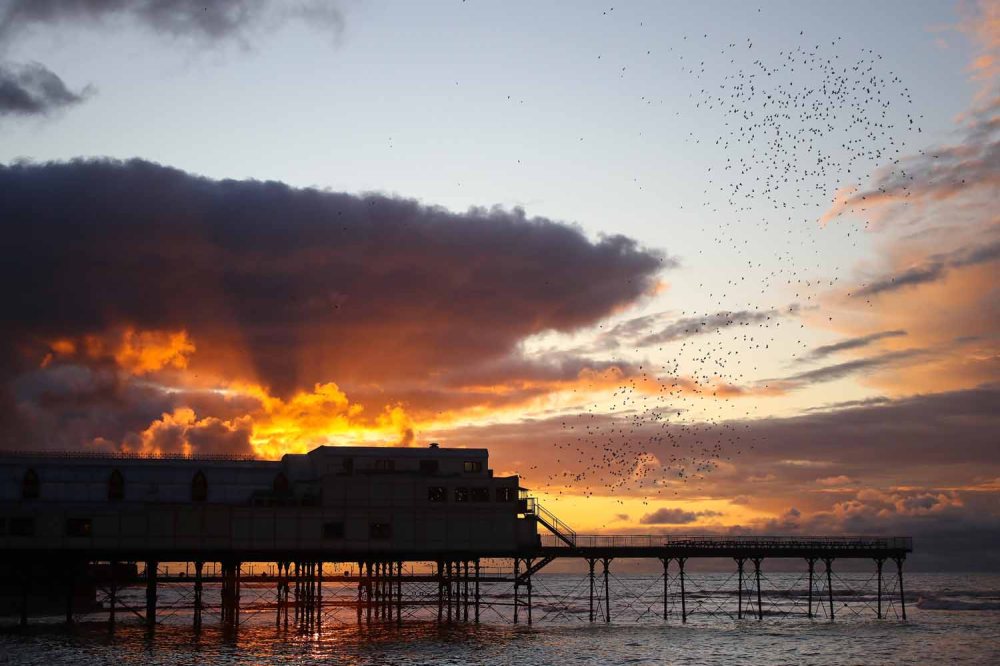 Within seconds all the birds were nestled beneath the pier and the sky was once again empty, the sound of rushing wings now replaced with the birds’ fevered chatter from among their iron perches.

Still relatively early in the season, the starlings numbers here have not yet reached their peak and so we should expect to see many more birds, and much more dramatic displays as winter advances.

What I hope to do next is to explore different viewpoints and perspective from which to capture the flocks, perhaps I might even venture out onto the pier itself and get a starling’s eye view, although I may need an umbrella!

Have you seen any murmurations in your area? Report your sightings here!